Crimson Cogward was one of the first faces the PCs saw aboard the Wormwood, since he was backing up the boatswain.

Crimson Cogward (so called after the colour his neck turns when he’s angry) was a loner, and prone to incredible rages and dark moods. He wore a blue Varisian scarf tied tight around his shaven head to hide the scar left when his ear was bitten off in a bar fight. Cog felt pleasure from little other than combat and was quick to get into fistfights, whether because of a chance remark or simple bad luck.

A devout follower of Pharasma, Cog prayed regularly (particularly after combat) and participated in all Pharasmin religious festivals if possible.

Crimson was aware that the crew was secretly working for Captain Harrigan. He also knew that the Quipper used to be the Man’s Promise.

Crimson became the captain of his own vessel: Death’s Servant. This lasted until he tried to bully Nude Pid, who ate him. 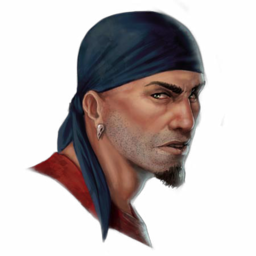