Former Captain of the Man's Promise

Ambrose Kroop was technically one of the Wormwood‘s officers, but the drunken cook had more in common with the ship’s press-ganged sailors than with the ship’s cruel officers. He took solace in the company of Black-Hearted Bezebel, his favourite among his pet poultry.

He has come to rely on Malikor, and enjoys spending a day drinking and chatting with him.

Fishguts is aware that the crew is secretly working for Captain Harrigan, and that the Quipper used to be the Man’s Promise.

Fishguts was sailing aboard the Red Delight with Captain Quinn when the entire ship’s company was captured by the Hurricane King. He was later rescued by the hobgoblins, but by then someone else held command of the Red Delight. 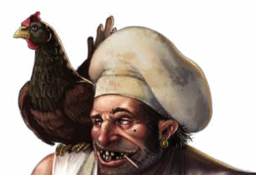