As the thirteenth Hurricane King, Kerdak Bonefist enjoyed nearly four decades of unprecedented success in piracy and unquestioned rule of the seas, but as years passed without Bonefist seeming to age at all, many Free Captains whispered that he had held on to the Hurricane Crown for too long, and that new blood was needed to revitalize the Shackles. Bonefist himself had fallen into bitterness and paranoia, believing others are plotting against him. Too often, he dismissed the deliberations of the Pirate Council in favour of his own inner circle of trusted advisors, including his consort Hyapatia and first mate Tsadok Goldtooth.

Bonefist was killed by the hobgoblins, and Marqua became the fourteenth Hurricane King. 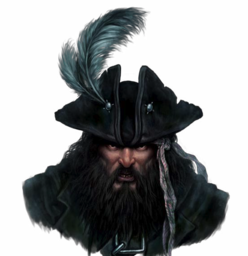