First Mate of the Man's Promise

Master Scourge served as the Wormwood’s boatswain and master-at-arms, and Captain Plugg’s right-hand man. As boatswain, he was in charge of all activities and sailors on deck, and as master-at-arms, he was responsible for discipline. Master Scourge was a sneering man with a braided beard and a mouth full of gold teeth. His body was tall and thin, and even his long coat and heavy boots failed to give any impression of strength or bulk.

The boatswain was the person who woke up the PCs on their first day aboard the Wormwood. He was backed up by Crimson Cogward, Fipps Chumlett, Jaundiced Jape, Maheem, Slippery Syl Lonegan, and Tam Narwhal Tate.

He transferred to the Man’s Promise with Mister Plugg and was promoted to first officer. He persuaded Captain Plugg to kill the hobgoblins rather than allow them to rejoin the ship’s company. 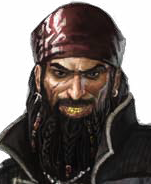