Duty’s call is a strong voice, but when that voice changes to one of rejection, that which is left must become even stronger. A disillusioned former patriot, Merrill Pegsworthy now answers to his own code as he plies the waters of the Fever Sea.

Captain Pegsworthy sailed into Rickety’s Squibs while the Man’s Promise was being squibbed into the Quipper. He negotiated with Sandara Quinn and avoided hostilities, and he has come to respect her. 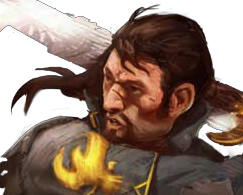