Oknarok was picked on from a young age for his weakness and was constantly last in the class when performing any physical challenges. He began to despair that he would never be able to qualify for true military service until one day he witnessed a small skirmish between a group of charau-ka and a squad of archers lead by the Crashing Horde’s most decorated marksman, Dronar. The charau-ka never even got close with Dronar himself killing 5 before they realized what was going on.

At that moment, Oknarok knew his purpose in life: To follow in Dronar’s footsteps and become the greatest archer the Crashing Horde had ever seen. Unlike the hacking and slashing so many of his contemporaries excelled at, archery valued speed and agility, something Oknarok had in spades. Also, being an archer meant standing at the back of the squad and getting hit less, something he was definitely in favour of.

Oknarok spent every spare moment training; first on the short bow and then (with some difficulty) on the long bow. One fateful day, there was to be an exhibition of archery prowess between all the recruits judged by none other then Dronar himself! Even more amazing, the winner would given special training and become the newest member of Dronar’s elite archer unit. Oknarok’s years of dedication and training paid off and he emerged the victor by a slim margin. It was the greatest moment in his young life, but it all came crashing down when he went to meet Dronar. Finally seeing the famous archer up close, Oknarok saw how large and powerful he was, very unlike the lithe form he had imagined. “Try shooting with this” Dronar said, giving Oknarok his personal 5 strength rating composite longbow. It might as well have been a tree trunk for all that Oknarok was able to draw it, much to the amusement of the audience. Dronar took back his bow and looked at him in disappointment, “you are fast, kid, but just hitting a target is not enough. You have to have stopping power”. With that Dronar swung around and with barely a glance, drew the massive bow and loosed an arrow toward a target across the other end of the field, hitting a perfect bullseye, driving the arrow all the way through the target and narrowly missing the crowd behind. “Someday you will be ready for something other then target practice” said Dronar, “but until then, I can’t use you. Consider this a consolation prize” and with that Dronar removed his silver embossed belt and handed in to Onarok. He put the belt on and vaguely noticed that it seemed to fit perfectly around his much slimmer waist. “Keep that belt, kid, I took it off an elf a long time ago and it has served me well. I have a feeling you will find it useful, too, just make sure you tell it whose boss.”

And with that the much stronger but slightly less skilled runner up was chosen and Oknarok’s day of triumph was over. He kept training and honing his skills, but knowing now that he would never be able to measure up to his hero, his heart wasn’t really in it. As his Year of Hell began, Oknarok had resigned himself to being a skilled but unremarkable archer destined for only minor advancement in the military. That was until they met that horrible wizard, anyway.

The elf that suddenly appeared beside the wizard stared at Oknarok and the hobgoblin felt his eyes as if they were burning a hole through his body. With growing dread, Oknarok remembered Dronar’s belt that he still proudly wore around his waist and realized that the elf would recognized the craftsmanship and come after him first. Suddenly all his training went out the window and he ran into the forest in a blind panic. As he ran, he was only slightly comforted by the occasional glimpses of the other members of his squad running just as fast. 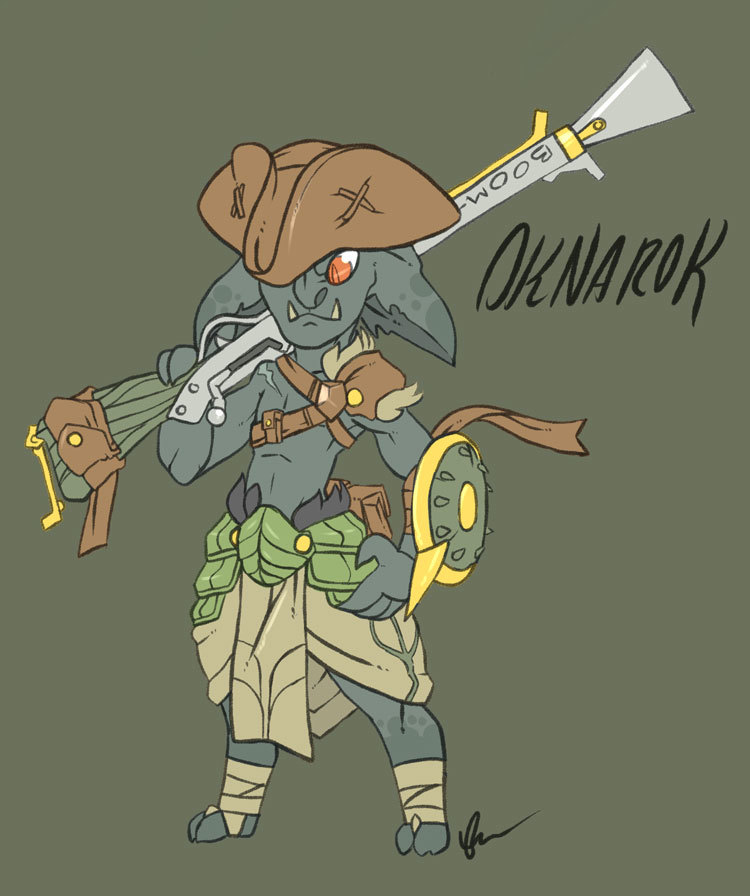