Although nominally an ally of Kerdak Bonefist, Omara is first and foremost an arms dealer from the famed Gunworks of the Grand Duchy of Alkenstar, sent to Port Peril to replace Dirana Llanalir as a personal emissary to the Hurricane King.

Omara is a Garundi woman with a shaved head and sharp gaze. Her time in the Shackles is reflected in the pirate styles that she has adopted into her dress, though she is most definitely not a pirate—she is a businesswoman through and through.

Bonefist imprisoned Omara when he found out that she had cut a deal with Oknarok. After she was freed she continued to serve the new Hurricane King as Alkenstar’s representative. 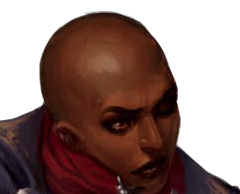