Short but fierce, Rosie Cusswell has more muscles than most of the crew, and a fouler mouth than all of them put together. Rosie is from Port Peril, and was impressed onto the Wormwood‘s crew (as opposed to joining voluntarily). She has only just joined and has already made her mark by threatening to chop off the hand of any of the crew who messes with her with her beloved handaxe. Some of the officers disapproved, but she doesn’t care.

Her insolence has already caused her to be flogged and to have her beloved fiddle confiscated.

She transferred to the Man’s Promise when Mister Plugg took command, and fought alongside the hobgoblins when grindylows attacked during a storm. She managed to be busy elsewhere during Captain Plugg’s final ambush.

Rosie is aware that the crew is secretly working for Captain Harrigan. She also knows that the Quipper used to be the Man’s Promise.

Rosie sailed aboard the Red Delight with Captain Quinn. She is currently the executive officer aboard the Empty Aye. 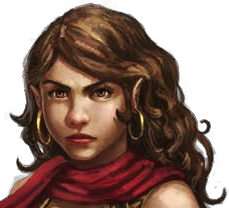