Former Captain of the Red Delight

Life is never easy, and Sandara Quinn’s life has been typical of that truism. The daughter of a poor fisherman and a seamstress, Sandara was raised in Hell Harbour. Her overworked parents had little time to spend with their daughter, and Sandara grew up on the port’s hard streets, where she quickly learned to look after herself. She worked on the docks when she could, carrying out what jobs she could get, and soon developed a keen eye for trouble and a reputation for standing up for herself. She began frequenting the bars and taverns of Hell Harbour by the age of nine and was learning the ropes of sailing by the age of twelve. Sandara’s calling came one night when a fleet of fishermen, which included her father, was lost in a powerful storm. Sandara prayed to Besmara the Pirate Queen, the goddess of piracy, strife, and sea monsters, and when her father returned the following day, weatherbeaten and half-drowned but still alive, Sandara knew the goddess had answered her prayers. Soon after, Sandara began devoting her time to the worship of Besmara, eventually setting up a small chapel on the Hell Harbour docks dedicated to her.

Sandara woke up aboard the Wormwood at the same time the PCs did. She was the first non-hobgoblin aboard ship to be friendly with them.

She disappeared from the Man’s Promise during a storm, right around the time some grindylows attacked. The hobgoblins tracked her down and rescued her. She was among the targets when Captain Plugg ordered the hobgoblins and their excursion ambushed, and participated in the fight on the winning side.

Sandara is aware that the crew is secretly working for Captain Harrigan, and that the Quipper used to be the Man’s Promise.

She negotiated well with Captain Pegsworthy, and they respect each other.

When she was leading a group of sailors in some tasks around Rickety’s Squibs they came into some money and treasure, and she kept almost all of it for herself. The other people were Rosie Cusswell, Tilly Brackett, Crazy Krooz, Jelga Norasdottir, and Woo.

Forced to scrounge for two scrolls of water breathing for ship purposes, Sandara will present an invoice to the hobgoblins for the cost she incurred doing so (a scroll of cure moderate wounds and 675 gold); as well she intends to present the idea that there should be some emergency stores of scrolls, potions, and equipment for officer use should the hobgoblin command structure be away or incapacitated.

Sandara was left on Crown Island in command of a squad. Her instructions were to clear the island of vegepygmies. Her team consisted of Hairy, Malatina, Orangutan, Red Starling, and Steel Semma. She lost two before fleeing.

Sandara took command of the Truewind and had it squibbed to become the Red Delight.

When the Red Delight was forced to dock in Azir for repairs Sandara was captured by the Pure Legion, as were Zamna Kwol and Woo. They were rescued by Smiling Seth Farharbour, Malatina, Grimbilnuk, Treason, and Yuku. Sandara lost most of her gear at that time, so now she wears her Pure Legion prisoner jumpsuit, a Pure Legion breastplate, and her holy symbol overtop.

When Tilly, one of Sandara’s officers, was captured by a bounty hunter and turned over to the Hurricane King, Sandara sailed to Port Peril and attempted to storm Fort Hazard. She and all her officers and crew were captured. The officers were kept prisoner and the crew were scattered among other ships serving the King. The Red Delight was given to the newly-minted Captain Bolaborubalub.

Sandara was rescued after the hobgoblins succeeded where she failed. 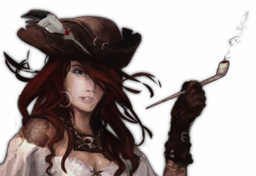