As first mate to Hurricane King Kerdak Bonefist aboard his flagship, the Filthy Lucre, Tsadok Goldtooth enjoyed a position of power and prestige far above that of most pirate officers.

Tsadok administered the three trials to the hobgoblins in order to determine whether they should qualify for a letter of marque. After fantastic successes (and a suitable bribe) they received their letter.

Oknarok paid off Tsadok in order to not be hassled after sending a marilith after another Free Captain. Tsadok kept to this when the hobgoblins attacked the sea caves by taking the Filthy Lucre away temporarily. He claimed the ship for his own and strongly suggested that he deserved a spot on the Pirate Council. 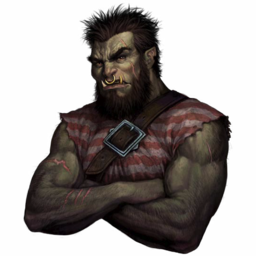