A skull and partial backbone carved from ivory top this +2 sword cane (Advanced Player’s Guide 179), and grey sharkskin covers its wooden scabbard. The wielder can use the Weapon Finesse feat to apply her Dexterity modifier instead of her Strength modifier to attack rolls with a scoundrel’s sword cane sized for her, even though it isn’t a light weapon. 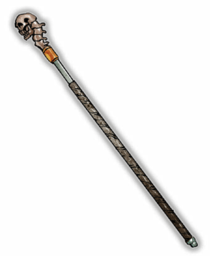